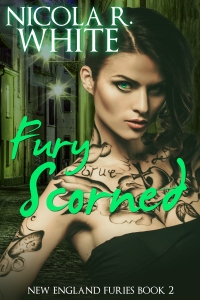 Born on the wrong side of the tracks, Alex Hughes has always known what people think of her—and working as an exotic dancer hasn’t exactly helped her image. But since bonding with a Greek goddess of vengeance six months ago, Alex has had bigger problems. Like dealing with the Spartans, the outlaw biker gang with supernatural connections terrorizing Boston.

And then there’s Tyler Kelly…

Tall, dark, and sexy, the ex-Navy SEAL is a deadly fighter and a potential lover. But Alex is more comfortable kicking ass than facing her feelings, and none of the men or women she’s dated in the past have made her feel the way Ty does. As if her life wasn’t complicated enough, she discovers there’s no wound like a bruised ego when she takes on the goddess behind the Spartans’ reign of terror—and loses. Alex’s faith in herself is shaken as enemies turn out to be allies and friends offer betrayal. But as the saying goes…