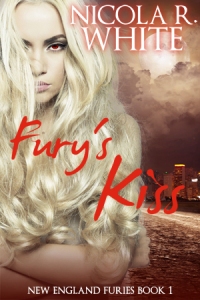 Tara Walker dreams of more excitement than slinging plates of seafood for Cape Cod tourists, but as she learns when she is attacked and forced to fight for her life, fate sometimes has a funny way of giving you exactly what you wish for. Faced with strange new powers and embroiled in a murder investigation, Tara must now race to uncover the secrets of the ancient Fury that has woken inside of her – and of the evil that stalks her.

As if Tara’s life hasn’t gotten complicated enough, she is forced to ally herself with Jackson Byrne, witness to her assault and uncle to a pint-sized oracle whose fate is intertwined with hers. Skeptical, stubborn, and oh-so-sexy, Jackson wrestles with demons of his own. He is determined to ignore the attraction rising between them even faster than the body count, but like it or not, he and Tara need each other if they are to unravel the mysteries that surround them.