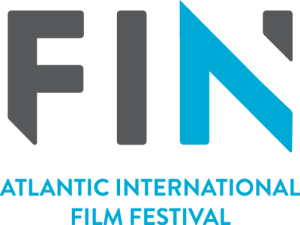 The FIN Atlantic International Film Festival just ended in my hometown of Halifax, Nova Scotia, and I had an amazing time at my first festival. The two short films I made this year premiered at the festival alongside dozens (maybe even hundreds?) of other films that were programmed. I definitely will need a little break before I go see anything new in theatres!

The opening night party was very glamorous, complete with a red carpet, but not too formal – this is Halifax, after all! The dress code here is always flexible, so festival-goers might show up in anything from a ball gown to jeans and a denim jacket. Here I am with the cast and producer of Welcome – Ahlan wa Sahlan.

Of course it was a thrill to see my films on the big screen, but the real highlight of the festival for me was winning an award for my first feature script! Breeder is a feminist horror movie about a young woman who is kidnapped and forced to become a surrogate whose baby will be auctioned off to the highest bidder. (I pitched it as Get Out meets Rosemary’s Baby).