There’s lots of Furies news to report, so I’ll give you the bad news first – I’ve had to push the release of The Fury Bride back from August to September, 2016. That’s partly good news, though, because the reason for the push is that I’ve been busy with new projects since Fury’s Kiss won the 2016 Kobo Emerging Writer Prize. Most of these projects are related to the Furies, but there’s one totally separate project that I’m very excited about and which will be announced later this month, so stay tuned!

Jackson Byrne isn’t quite sure how he ended up engaged to a woman with powers straight out of Greek legend, but he wouldn’t trade the life he’s made with his fiancee, Tara, for anything. With the big day fast approaching, he’s determined to give his bride the wedding of her dreams – unless Greek god and party boy, Dionysus, gets in the way.

This New England Furies short story takes place between the events of Fury Scorned (Book 2) and Dark Fury (Book 3), shortly after Venus Rising (another short). I particularly enjoyed writing this story from Jackson’s point of view! 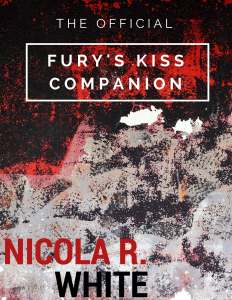 This novella-length (approx. 30 pages) peek behind the scenes into the world of the New England Furies has been available to newsletter subscribers as a free PDF since last August, but the kind folks at Kobo have helped me convert the file to true ebook format and the Companion is now available for purchase as well ($0.99) in the new, improved format.

This book is best read on an e-reader or tablet with a color display, or on your desktop, as it uses a number of photos and graphic design elements.

A note about pricing: This book is $0.99 at Kobo and iBooks, but because of the large file size, Amazon won’t allow a price lower than $1.99. 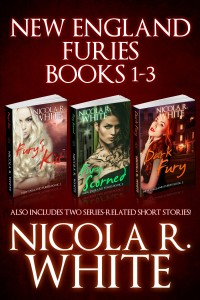 This box set collects the first three books of the New England Furies series into an affordable bundle, along with two related short stories (Venus Rising and Something Blue).

In the exclusive Kobo version, you will also find included a copy of The Official Fury’s Kiss Companion.